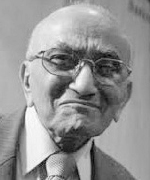 Born on 21 December 1921, Prafullachandra Bhagwati graduated in mathematics with a first class degree from Elphinstone College Bombay in 1941, and courted arrest during the national freedom movement in the following year. Having taken his law degree, first class, from the Government Law College Bombay, he practised at the High Court of Bombay. His judicial career commenced with his appointment in 1960 as a Judge of the High Court of Gujarat, followed by his appointment as Chief Justice of Gujarat in 1967. In 1973, he was appointed a Judge of the Supreme Court of India, and in 1985 as Chief Justice of India.

Justice Bhagwati is one of India's most distinguished jurists, perhaps the most visible member of India's judiciary since independence. During his tenure, the Supreme Court of India developed comprehensive human rights jurisprudence. Through creative interpretation, he expanded the reach and context of the fundamental rights embodied in the Constitution, much beyond the expectation or even the dreams of its makers. Recognizing that the impoverished lacked the resources to litigate, he developed the strategy of Public Interest Litigation by expanding the doctrine of locus standi, enabling any individual, social action group or non-governmental organization to espouse a cause. He introduced a system known as epistolary jurisdiction, whereby a letter of grievance would be sufficient to commence a proceeding. Thereby, human rights was made more meaningful for the poor and the disadvantaged.

Justice Bhagwati was a member of the UN Human Rights Committee since 1995, and served as its Vice-Chairman and Chairman for six years. He has been a member of the Committee of Experts of the ILO for over 15 years, and is a Member of the Permanent Court of Arbitration at The Hague. He was the Regional Adviser for the Asia Pacific Region to the UN High Commissioner for Human Rights, and has also carried out several missions for the United Nations, the Commonwealth Secretariat and the International Commission of Jurists. His services have been utilized by several countries including Mongolia, Cambodia, Nepal, Ethiopia, and South Africa in framing their Constitutions, and particularly the chapters on human rights. He was a member of the Goldstone Commission of Inquiry in South Africa; he presided over the Peoples Tribunal for Violence against Women at the Vienna Human Rights Congress; and was a member of the International Mediation Team (with Henry Kissinger and Lord Carrington) that mediated between the Inkatha and the African National Congress before the elections in South Africa. He is the Chairman of the Eminent Persons Group, established by the UN High Commissioner for Refugees, for the study of questions relating to refugees, Chairman of the Advisory Board of the Centre for the Independence of Judges and Lawyers, Geneva; and a member of the Advisory Council of the World Bank for Legal and Judicial Reforms.

Justice Bhagwati is a Honorary Fellow of the American Academy of Arts and Sciences, and a Honorary Member of the Association of the Bar of the City of New York. He is Chancellor of the University of Hyderabad and Chancellor of the Lal Bahadur Shastri Sanskrit Vidyapeeth.