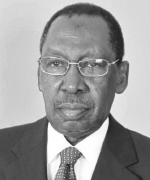 Muhammad Lawal Uwais was called to the Bar by the Middle Temple, London, in 1963 after graduating from the University of London. He served as a State Counsel and Senior State Counsel (1966-1970), before his appointment as a Judge of the High Court, and later Chief Judge, of Kaduna State (1973-1976). In 1977, he was appointed a Justice of the Court of Appeal, and in 1979 as a Justice of the Supreme Court of Nigeria. In 1995, he was appointed Chief Justice of the Federal Republic of Nigeria and Chairman of the National Judicial Council.

Justice Uwais has served as Chairman, Nigerian Body of Benchers (1993-1994), and as Chairman, Board of Governors of the National Judicial Institute of Nigeria (1995- 2006). He was Chairman of the Judicial Commission of Inquiry into the Awards of Contracts by the Military Government of North Central State (1976); Chairman of the Jimeta Disturbances Tribunal, Gongola State of Nigeria (1984); and a Commonwealth Member of the Presidential Commission of Inquiry into the deaths of senior army personnel, Sri Lanka (1993).

He is the Honorary President of the World Jurist Association, Washington D.C; Honorary Fellow of the Society for Advanced Legal Studies, London; and a Member of the Board of Trustees, Global Legal Information Network Foundation (GLIN), Washington D.C. He was Chairman of the Nigerian Electoral Reform Committee (2007-2008); and was appointed Chancellor of Umaru Musa Yaradua University, Katsina, Katsina State in 2011.