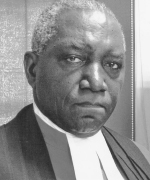 In 2011, a felicitation volume, Rule of Law vs. Rulers of Law: Justice Barnabas Albert Samatta's Road to Justice, was published by the School of Law, University of Dar es Salaam, "to celebrate him as an example of an ethical lawyer whose integrity cannot be questioned, making him a worthy model for the younger generation to emulate and draw inspiration from". The editors add:

"This book reproduces some of the leading judgements written by Justice Samatta. It highlights, in a critical fashion, some of his beliefs and observations as embedded in his decisions and speeches. Justice Samatta's decisions touched on key areas of: Rule of Law and the Consitution, where he emphasised that the Constitution crystallises a consensus among citizens as to the nature and character of their polity and governance; Access to Justice, about which he believed that the doors to justice should be opened to all regardless of their station in life or economic position; Ethics, Integrity and Professionalism where he frequently quoted Nyerere 'There are some jobs in our society that can be done by unethical people...Being a judge or a magistrate is not one of these jobs...'; and Environmental Law where he argued 'The vulnerability of our planet has reached such a depressing degree that there is no greater service judges can render to mankind than playing their role in the protection of the environment...' He summarised his life-long conviction by saying: 'Let everyone in our society give justice a chance to prevail'."