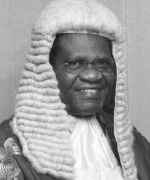 Benjamin Odoki was educated at Kings College Budo and at the University College Dar-es-Salaam, Tanzania, where he obtained a Bachelor of Laws degree in 1969. He was enrolled as an Advocate of the High Court of Uganda in 1970. Appointed a State Attorney in 1969 and Senior State Attorney a few years later, he also served as Director of the Uganda Law Development Centre. His judicial career began at the age of 35, with his appointment in 1978 as a Judge of the High Court of Uganda, at a difficult period in his country's history. From 1981 to 1984, he served as Director of Public Prosecutions on secondment from the Judiciary. In 1986, he was appointed a Justice of the Supreme Court. From 1996 to 2000, he served as Chairman of the Judicial Service Commission. In 2001, he was appointed Chief Justice of Uganda. He is also a Member of the Permanent Court of Arbitration at the Hague, and a Judge of the Administrative Tribunal of the African Development Bank.

In 1989, he was appointed Chairman of the Uganda Constitutional Commission which collected the views of the public and prepared a Draft Constitution for Uganda which was debated and adopted by an elected Constituent Assembly in 1995. He also served as consultant on constitution-making processes in Kenya, Swaziland and Rwanda.

Justice Odoki is the Chairperson of the Editorial Board of the Uganda Law Reports, and is also a member of the honorary editorial board of the Commonwealth Law Bulletin. He has published several books and articles on subjects ranging from criminal justice and human rights to constitutional development. In 2005, he published "The Search for A National Constitution: The Making of the 1995 Constitution of Uganda." He has taught law at Makerere University where he later served as a Member of the University Council. For many years he was Chairman of the Uganda Law Council which is responsible for the regulation and disciplinary control of the legal profession. He later chaired a Committee to review Legal Education, Training and Accreditation in Uganda,