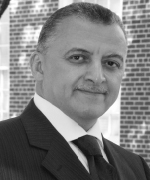 Prior to becoming a member of the Judicial Integrity Group, Justice Adel Omar Sherif participated in the Round Table Conference held at the Peace Palace at The Hague in November 2001 at which the Bangalore Principles of Judicial Conduct were finalized.

Adel Omar Sherif holds several law degrees and diplomas from the Cairo and Ain Shams Universities in Egypt, including LL.B in Law and Economics, Advanced Diploma in Public Law, Advanced Diploma in Administrative Law, and Ph.D in Constitutional Law. He was engaged in private practice for a short period before his appointment to the Council of State, Egypt's administrative judiciary, where he served in various capacities between 1980 and 1992. In 1993, he moved to the Supreme Constitutional Court of Egypt as Assistant Counsellor and, after a series of promotions, was appointed Deputy Chief Justice in 2002.

Justice Sherif has published widely on subjects ranging from human rights and constitutional law to Islamic law and environmental law. He was a Visiting Fellow at the Human Rights Law Centre of the College of Law, DePaul University in Chicago; at the Human Rights Centre of the University of Essex, and at the Federal Judicial Center in Washington D.C. He is a Council Member of the Centre of Islamic and Middle Eastern Law at the School of Oriental and African Studies, University of London. He has been a Visiting Professor at the Faculty of Law at McGill University, and is currently a Distinguished Global Visiting Professor of Law at the Southern Methodist University, Dallas, Texas. In 2005, the President of Kazakhstan awarded him the Medal of the Constitution of Kazakhstan, and in 2007, the Ateneo de Davao University in the Philippines conferred on him an Honorary Doctorate in Law.