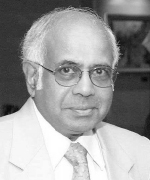 Born in 1941, Param Cumaraswamy received his early education in Kuala Lunpur. He is a Barrister-at-law of the Inner Temple, London, and an Advocate and Solicitor in Kuala Lumpur since 1967. He was the President of the Malaysian Bar Council between 1986-1988, and was also one of the founding members of the Bar Council's Human Rights and Legal Aid Committees. In 1977, a public protest made by him over the death sentence imposed on a 14-year old boy by the High Court of Malaysia on a firearms possession charge, led to the threat of prosecution for sedition. In 1985, he was charged with sedition when he called on the Pardons Board of Kuala Lumpur not to discriminate against a poor labourer's petition for commutation of a death sentence. Regional and international Bar Associations sent representatives to observe his trial. His acquittal was hailed as a landmark victory for freedom of expression in Malaysia.

In 1994, Dato Param Cumaraswamy was appointed by the UN Commission on Human Rights as the first United Nations Special Rapporteur on the Independence of Judges and Lawyers. He served on that mandate until 2003. As the UN Special Rapporteur, he intervened in more than 100 countries and conducted numerous fact-finding missions to investigate attacks on the independence of judges and lawyers and on the rule of law. He reported annually, for nine years, to the Commission on Human Rights. Having been associated with the drafting of the Bangalore Principles of Judicial Conduct from the inception, he presented the final draft to the Commission in April 2003.

In 1995, he was sued in four defamation suits for over US$100 million damages over statements made by him to a London-based magazine – International Commercial Litigation. After several years of legal proceedings in both original and appellate courts, the Malaysian Government dropped the case after the International Court of Justice, upon a reference by ECOSOC, handed down an advisory opinion that, under the Convention on the Privileges and Immunities of the United Nations, the Special Rapporteur was "entitled to immunity from legal process of every kind for the words spoken by him".